First, our sail from Isla Isabela to Mazatlan: May 5th-6th, 2017.
We sailed off the hook from the east anchorage on Isla Isabel and headed 330 * North toward Mazatlan. With about 90 miles to travel we planned an overnight passage. We drifted the first 3 hours. Then the wind barely filled in, but enough to commit to sailing on. Early afternoon, the wind picked up to a more steady 4-8 knots out of the NW. We saw tons of sea turtles. By nightfall we’d barely gone 25 miles, but the wind kept up. Over the night there were a few drifting moments, but for the most part we had enough wind to cover 40 miles. The wind slowly switched out of the west and even the south for a little bit. We saw more sea turtles the next day, probably a total count of over 40. On the way in to Mazatlan we were cruising with winds up to 12-15 over our port beam. We dropped the hook on the East Side of Deer Island @ 1600 on May 6th. 2314.238 N , -10627.679 W

The next morning we timed our entry to the mouth of the harbor to arrive at 07:30 am for a good reason.  The SW swell was rolling in at 3 feet, 0800 was high tide and the bar at the entrance to marina Mazatlan and El Cid is shallow enough to break all the way across, so we needed that peak incoming high tide. We motored close to the entrance and timed our entry between the sets. SV Easy waited just behind us.  We made it through without any problems, but if we had not been careful we could of had breaking waves!

We came into Marina Mazatlan and we’re immediately greeted by the dock guards, who lead us to a slip. We had been to Marina Mazatlan before and liked it, but man does it burn through the pocket book fast! We’re not use to this daily fee. The funny thing about Marina Mazatlan is that it’s cheaper to pay for 8 days than it is to pay for 4 to 7. We had a few things we wanted to do on the boat while docked, we would be there a few days anyway, to pick up Ellamae from her stay with her Papa, so we paid for 8. OUCH, but we made every bit of it count.

Taj found his new #1 seat on our Mantus Anchor.

Both times that we’ve been to Mazatlan, we’ve thoroughly enjoyed ourselves. This time was a little different than our last visit here around the same time of year last year. We only went to the “old-town” in the city once. We went bowling twice, swimming with our friends at El Cid Marina once, we met up with some very long ago family friends that live in Mazatlan, and spent the rest of the time on boat-schooling and boat projects. 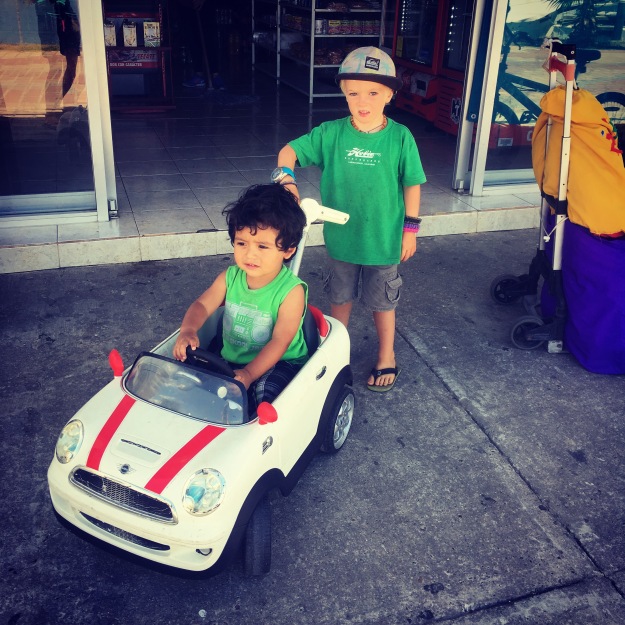 Taj’s new friend at the tienda (snack shop) at the head of the dock.

The trip to the city was more to stretch our legs and get outside. We ended up walking at least 6 miles along the malecón and through town. Nina and Taj skateboarded, which made the trip a little more tolerable. Everyone was a little sore the next day. It felt great!

Bowling was fun. Not affordable by any means ($20-30 per family for an hour), but fun nonetheless. The bowling alley is in the Liverpool mall, which is walking distance from the marina. The first time, SV Raireva took us. The second time we went with SV Easy and the family on SV Riki Tiki Tavi. What a blast! 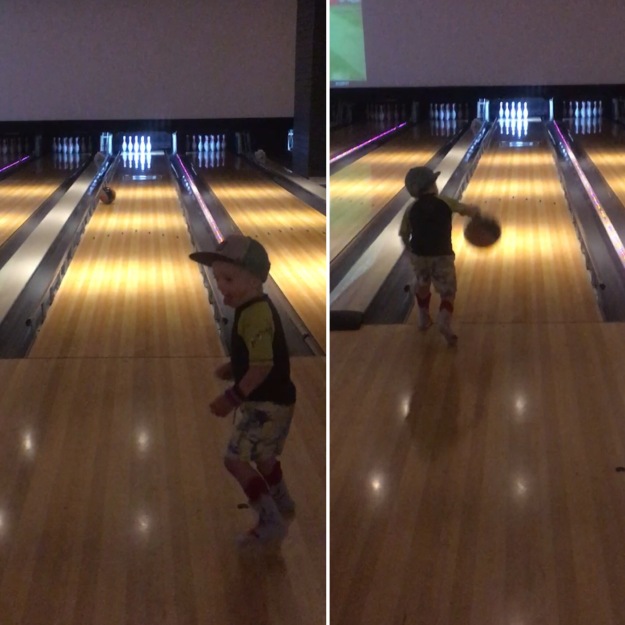 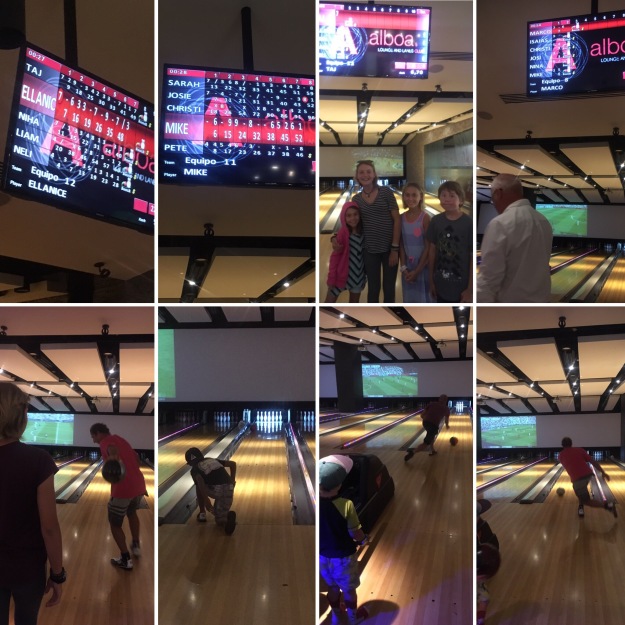 Swimming at the El Cid was fun, but the water was not very warm and the place is a wind tunnel. Oh and they don’t let kids under 12 in the hot tub, boo 😒. Our time spent there was short.

I mentioned meeting with family friends from long ago. The Lonsdale’s, were friends with my parents when they lived near Mammoth Mountain. This was before and maybe a little after I was born; wait for it ….. 36 years ago.  They are also world travelers and have done quite a bit of relief work all over the world. They ended up moving to Mazatlan over 8 years ago and starting up 2 Looney Bean coffee shops; one in Downtown Mazatlan and the other one in Cerritos, a town on the very north end of Mazatlan.  Looney Bean originally came out of Mammoth Mountain, so when we saw it in Mazatlan, we were super excited. They roast their own coffee down here and it is sourced responsibly. They even donate 10% of the whole bean coffee sales to families in need in local areas. Before we led the coffee shop, we left our boat card with our number and email and sure enough, a few days later, Heidi, the owner called me. She was so excited, as was I, to make the contact after so many years had passed. Long story short, they invited us for dinner and we had a great time with very good people reminiscing and talking about traveling life. We are hoping to stop by on our way back south to spend more time with them, including surfing the local spots together!

In front of the Cerritos Looney Bean with one of Heidi and Tom’s daughters.

Ellamae and I Sporting the Looney Bean shirts.

Heidi zipped off on her scooter. Love this lady!

Tom and Heidi with myself. Can’t wait to see them again next fall! 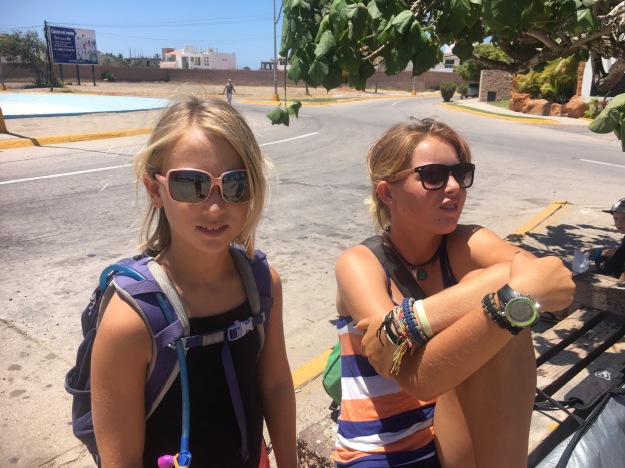 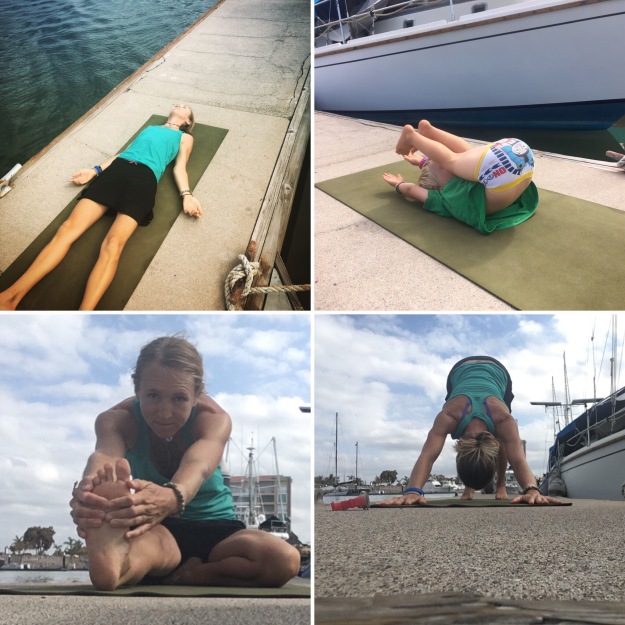 My dock yoga shipshape time on the dock. Getting “grounded” after so much water time.