As always, still delayed on the posts and still trying to catch up.

The last leg of our journey north in the Sea of Cortez as a family unit all together. I had to get to Santa Rosalia by the 21st of June in order to fly Ellamae over to spend time with her papa, Jason and to get myself to the states to start my 13 week Travel Nursing assignment in San Francisco. Time crunched are never fun when you are cruising. It never ceases to fail that you find something spectacular right when you have to leave. This proved to be the case with Isla San Marcos.

We left Punta Chivato under sail. All three of us, S/V Kenta Anae, S/V Easy, and S/V Shawnigan, sailed off the hook. What a beautiful sight.

The sail north was peaceful. We actually were experiencing a little northerly winds, which is less common this time of year. Regardless, the sail was comfortable and we made it to our first anchorage on San Marcos 27.236156, -112.105651 with only one cool event to post: Taj spotted a Hammerhead shark about 100 meters off our boat. Taj has proven to be quite the shark spotter.  We weren’t close enough to get an exact identity of the type, but we were excited to see our first hammerhead since we started cruising.

We spent the night there and the whole next day to swim and explore. The water was starting to get warmer and was a lot clearer!  We did some spear fishing and lounged around.  We had 7 days to kill and we finally felt like we could settle in a bit more and relax. While we were anchored there, a catamaran showed up with kids aboard! S/V Father’s Grace had two girls between Nina’s and Ellamae’s ages. Isla San Marcos just got even better!

We all found our sandy spots to drop the hook in. Thankfully the visibility was good enough to distinguish sand from rocky outcrops. The water was still chilly, but warmer than what we were experiencing the previous week.  The visibility was also so much better. It fluctuated with the tide change, but overall it was at least 20 feet at all times. Los Arcos is by far one of the funnest places we’ve spent as a family cruising. Granted, we finished up the year of boat-schooling, so we had more free time, but I still think we would have enjoyed the area just as much. 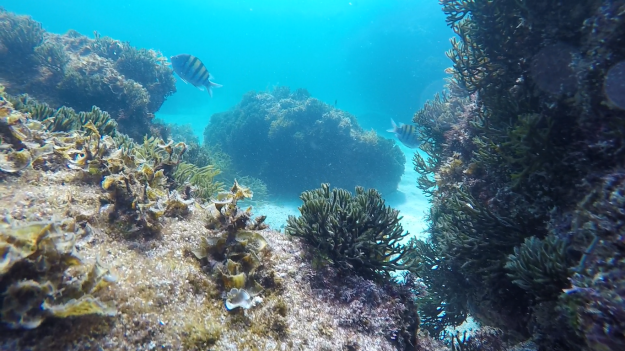 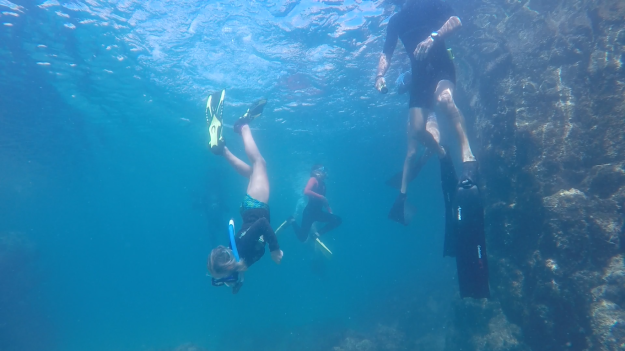 Everyday we snorkeled, spear-fished, and jumped off the arches. There were under water caves to swim through and partially submerged caves to crawl and swim through that lead from one side to the complete opposite side of the mound. 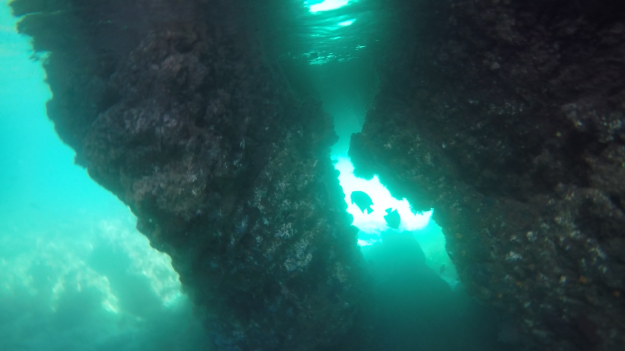 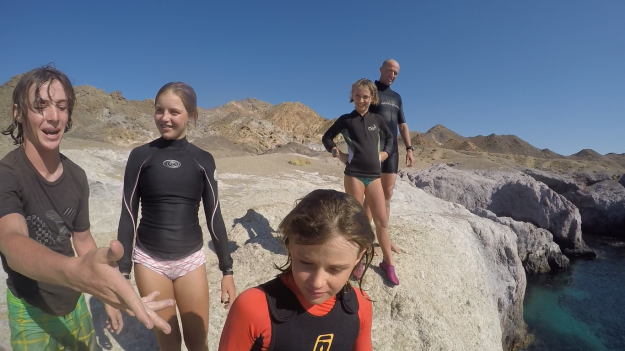 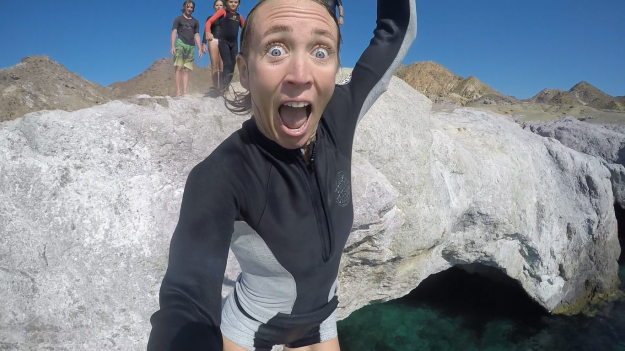 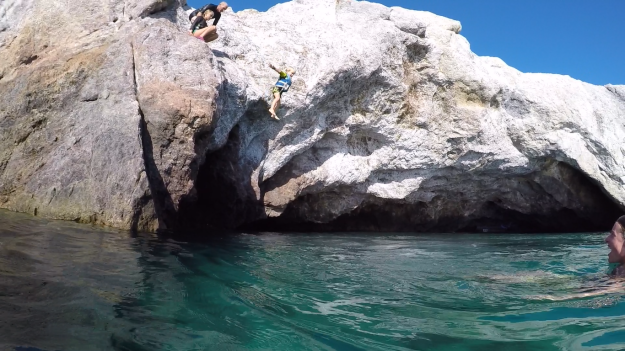 And beach BBQ & bonfires to be had. This was adventure paradise and we were there with nobody else but the four of our boatholds (my #boatlife word for household) ! 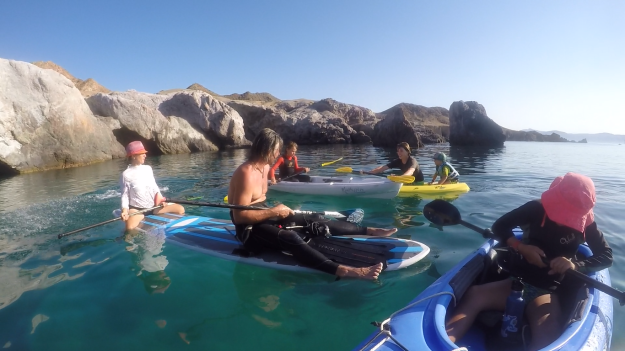 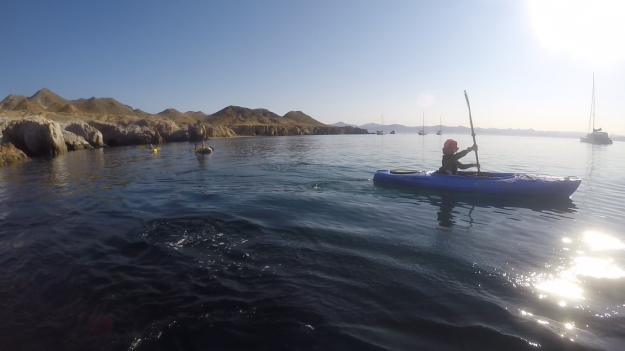 We were hooked on this place and did not want to leave.   S/V Kenta Anae was running out of water, but with our Sprectra Ventura 150 we had enough water to share. That bought us the first “extra” day there. We probably could have stayed another day past already staying another day, but alas, our last food provision was back  in Mulege and we were starting to run low on fresh produce. We needed to get to Santa Rosalia  to stock up and so that I could prep for heading back to the JOB.

SV Father’s Grace heading into Santa Rosalia with Ellamae aboard. 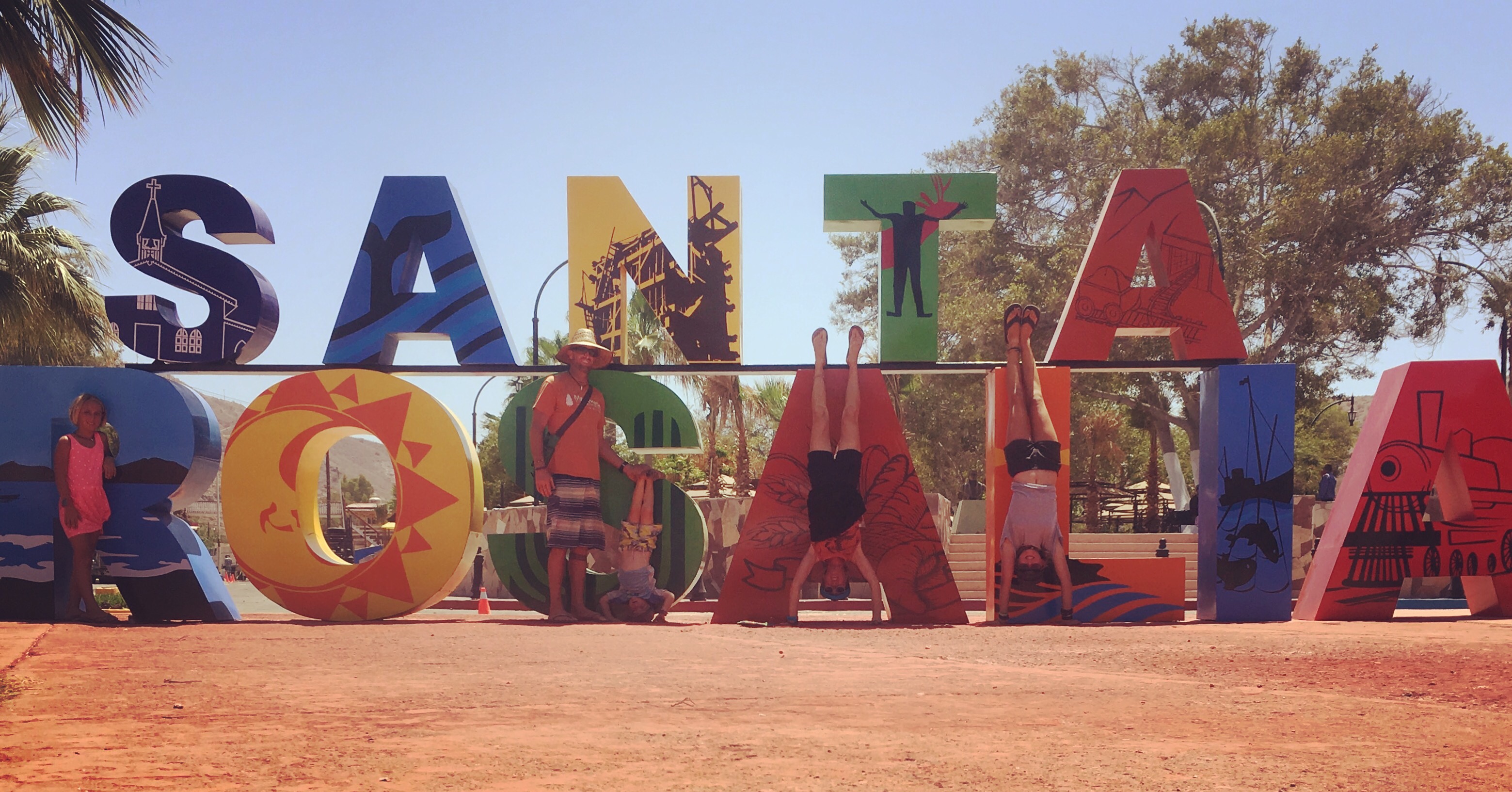 From the moment the boat hit the dock, the energy level went up.  We were back in civilization and the temperature went up exponentially. “Who turned on the heater?!” The kids wanted to see the city, eat ice cream, eat out, swim in the pool and hopefully meet new kids. 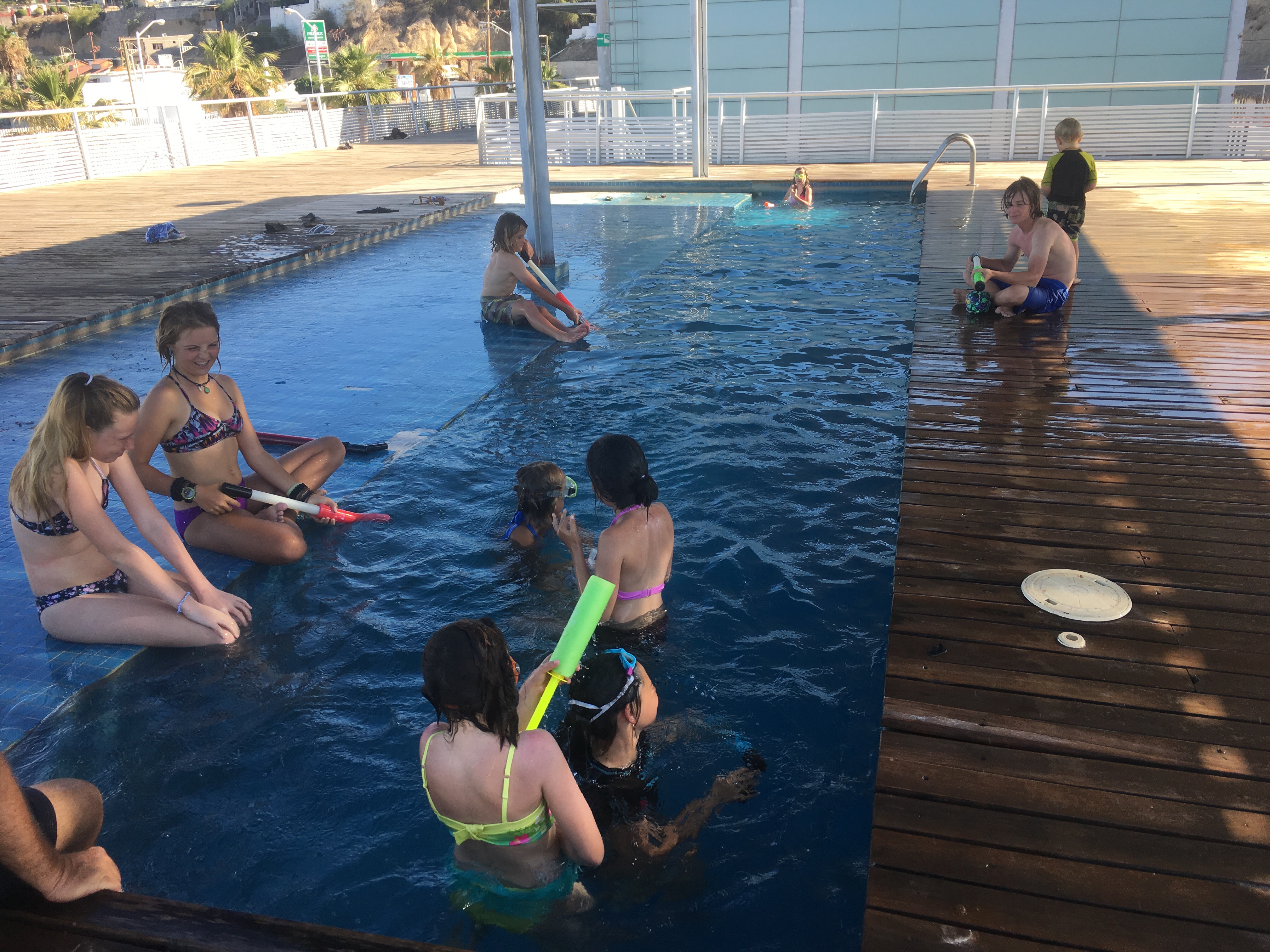 The kids even had time to dye the hair of SV Father’s Grace’s dog!📷

I was under a time crunch to pack for The States. I also wanted to clean the boat and have it organized to make Christian’s single dad and captain experience a little more fluid. Christian was in charge of provisioning this time around since he was continuing on with Nina and Taj aboard to head up to Bahia de los Angeles and then up to Puerto Penasco.

With all of the hubbub and the heat, we still managed to enjoy Santa Rosalia.

The Aguila bus station , to catch the bus to Tijuana, is right next to the marina Fonatur. The cost was about $80 for me and $60 for Ellamae. We left on the evening of June 22nd for an overnight bus ride. I wouldn’t be seeing S/V Shawnigan or the rest of the family for at least a month and it would be longer for Ellamae. 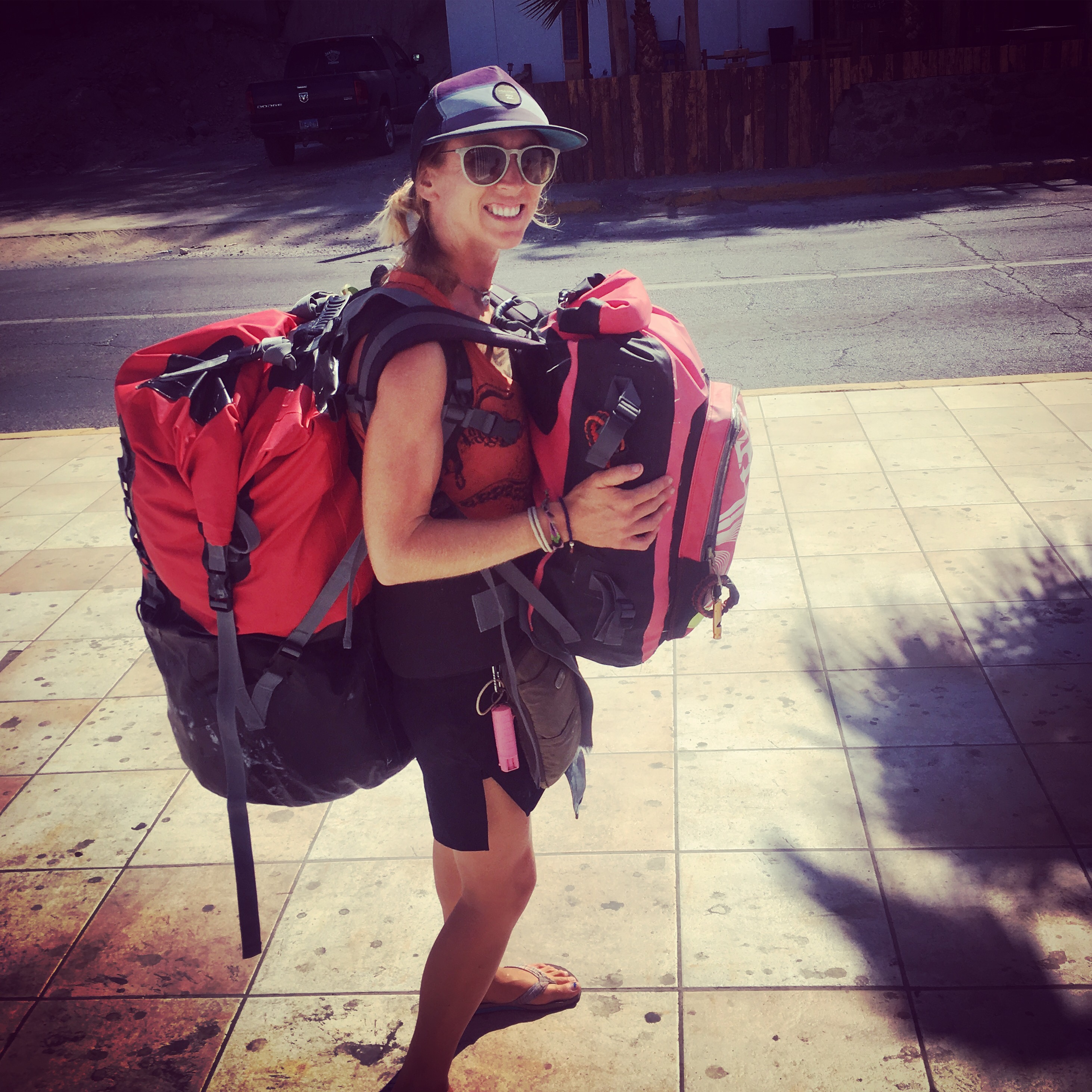 <<<<
the next day toward Bahia de Los Angles. Mike, on S/V Easy, buddy boating alongside…

More pics from this time period:

On our last day of boatschool before our summer break, we baked and had recitals. 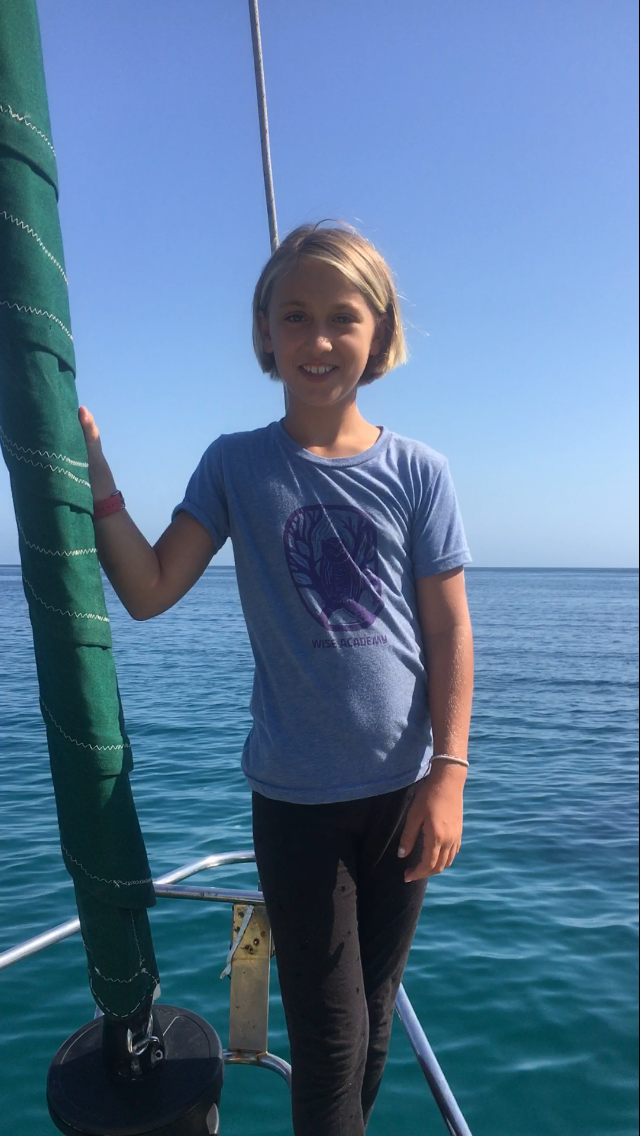 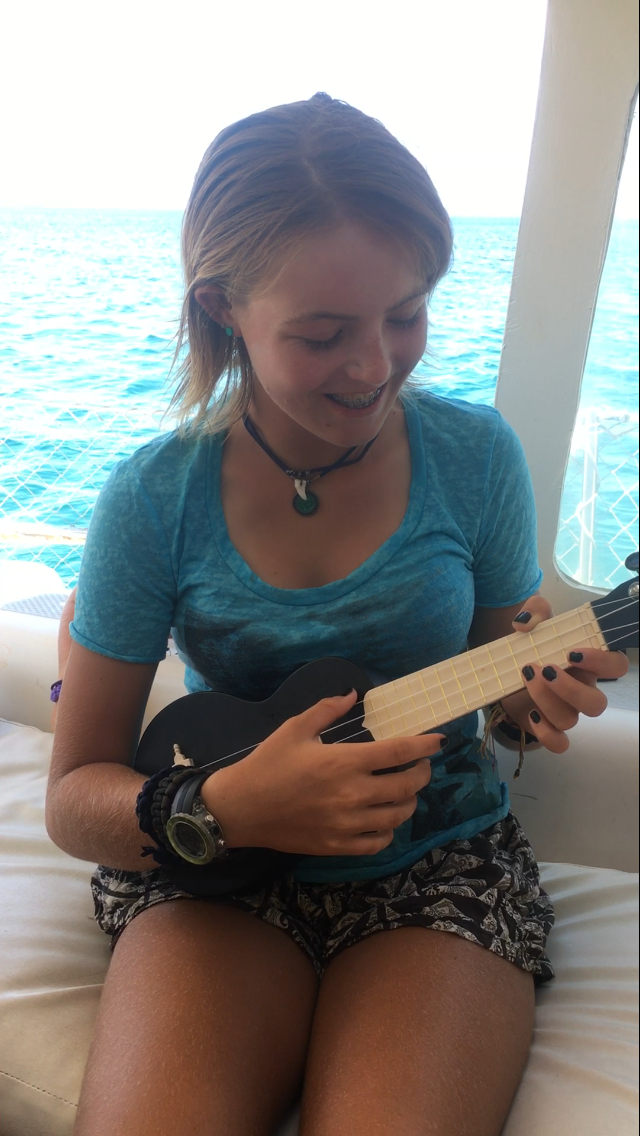 Then a lot more jumping!!! 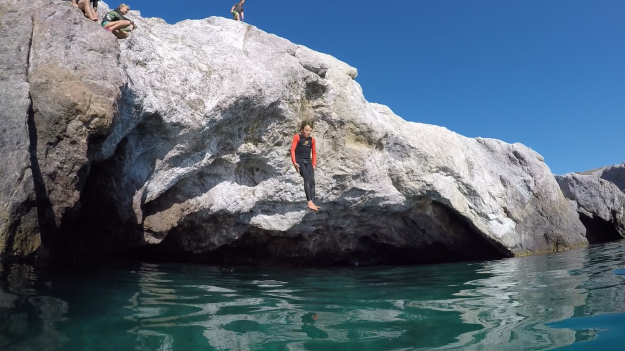 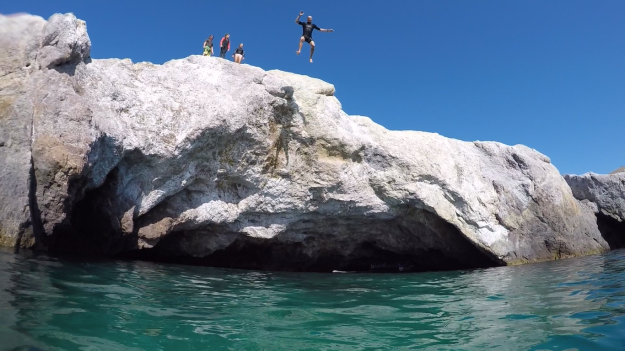 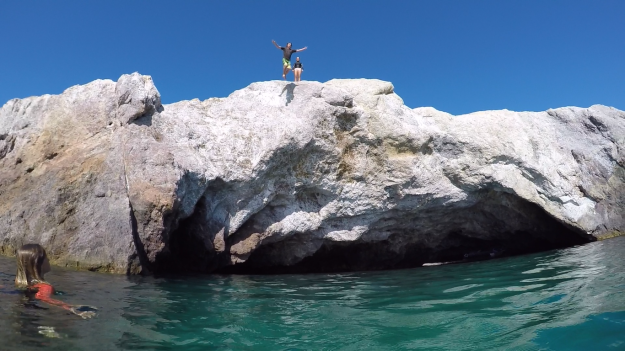 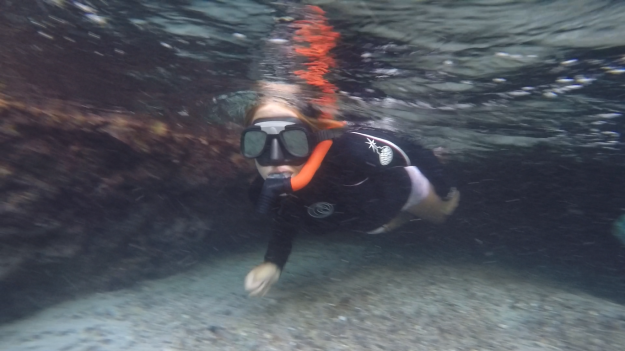 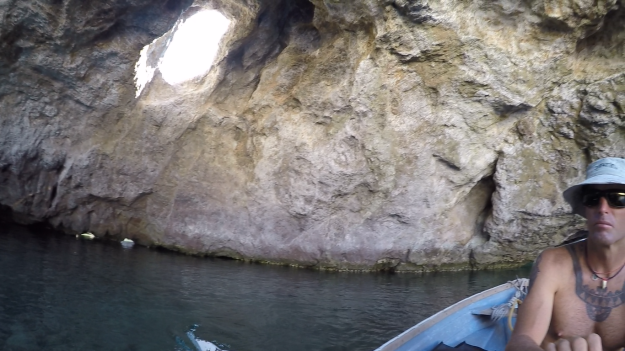 Me, Josie, chasing the grebe.